After a summer of training, a bout with a minor injury, and weeks of anticipation, my fall racing schedule kicked off with a bang (how's that for a mixed metaphor?) this past weekend as I participated in two separate events.  Since one was a 5K and the other was a half marathon, I didn't think it was going to be too problematic as opposed to, say, running a half marathon on Saturday and a full marathon on Sunday.  I know people who have done that, and they're idiots.  Or maybe they're just extremely fit and dedicated runners who don't know the meaning of the word "fail."  Decide for yourself. 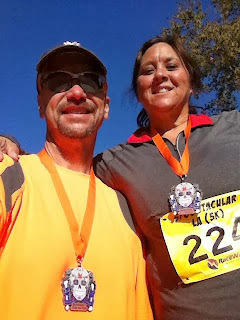 Theresa and I signed up to run this one together, well, kind of.  Initially this event was scheduled for Sunday, October 20th, so when we initially registered, my plan was to bust out a 5K PR and call it a day.  But the race ended up getting rescheduled to the 12th, so I didn't want to take a chance on wearing myself out the day before a half marathon.  Instead, Theresa and I ran pretty much side-by-side and she beat me by two seconds.  Ladies first, I always say.  This was a really small event, comparatively speaking, with only a few hundred runners total in the 5K, 10K, and half marathon.  That being said, however, it was one of the most enjoyable and well-organized races I've been a part of.  We arrived at Bonelli Park in San Dimas about an hour before the start, checked out some of the vendor booths, and mingled with the other runners, several of whom were dressed in Halloween costumes.  My personal favorites were the jellyfish (big styrofoam domes wrapped in cellophane with streamers hanging down all around) and the father-daughter tandem dressed as a Ghostbuster and the Stay-Puft Marshmallow Man.  That one seemed somewhat lacking in foresight, because the Stay-Puft outfit did not do a lot for the guy from an aerodynamic standpoint.  Looked cool, though.

The course was simply gorgeous.  We ran alongside a shimmering lake, across the dam, and along a tree-lined path that made up the 3.1 mile "out-and-back" course.  It was somewhat hilly, but nothing too troublesome.  I ran this one strictly to enjoy the morning and run with Theresa, and that made it a great run, free from the pressure of breaking a PR or hitting a time goal.  Theresa finished 4th in her age group, coming in at 37:34, I was two seconds behind at 37:36.  We got our medals (REALLY cool Halloween-themed bling), scarfed down the post-race goodies, and headed for part two of the weekends festivities.

The Long Beach Marathon and Half Marathon is part of the Beach Cities Challenge, a three-race
trilogy that gives runners the chance to earn an enormous bonus medal the size of a pie plate (that's how they advertise it).  You can complete the challenge in any order, but the three races must be run consecutively.  I did the Orange County Marathon last May, and I'm already signed up for the Surf City Marathon in February, so Long Beach is race number two in the series for me.  The course promised to be wonderful . . . a pass by the Queen Mary, a three-mile stretch along the beach, fabulous weather, and it completely lived up to these expectations.

We went to the expo on Saturday afternoon and as is the custom (it might be a law, I'm not sure) we spent way more money than we should have.  Theresa got a massage and a couple tech shirts, I picked up a running belt with a zipper so I don't lose my keys while running (again) and a bunch of CLIF Bars (banana nut bread flavor, thank you very much), among other assorted goodies.  We then headed to Chili's for lunch (pasta), followed by hotel check-in, and a relaxing afternoon.  My brother Bobby and his fiance (first time I've referred to her as that . . . they're very recently engaged) arrived later that afternoon.  Bobby and I were signed up for the race, Theresa and Amy were there for moral support and photo ops.

After a light dinner (Subway), I hit the sack early so I could be up around 4:30 to go through my pre-race routine.  The start time for the half marathon was 7:30, so I needed time to eat something, hydrate, take care of "business" and loosen up a little bit.  Also, we had about a six-mile drive from the hotel to the starting area, and we didn't want to risk getting snarled in traffic or some other unforeseen snafu.

Things went according to plan, so we arrived at the start around 6:15, just in time to see the start of the full marathon and the bike tour.

And then it was showtime.

In large events such as this one, runners are grouped into "waves" or "corrals" based on their estimated finishing times, with the Kenyans at the front and the walk-runners at the back (this is not how it's worded on the registration form, but you get my drift).  This is so slow runners don't end up getting trampled and elite athletes don't get a PR screwed up by tripping over some guy in a banana costume and trust me, there's ALWAYS some guy in a banana costume.  Bobby and I estimated our finishing times as 1:55, which put us in Wave 3.

I basically started the Long Beach Half with a four-level goal.  First, and least realistically, I hoped to run a 1:50.  I figured that if I felt strong and conditions were perfect, I'd have an outside shot at this.  To be honest, I had no rational data to support this goal, but whatever.  It was there.  If that didn't work out, then 1:55 would be perfectly acceptable, and I was pretty confident I could make that happen.  But if not, well, then I'd have to settle for breaking my PR of 1:57:04, set at the San Diego Half Marathon in March.  And if, for whatever reason, I failed at that . . . anything under two hours would have to do.

Sometimes I tend to over-think these things. 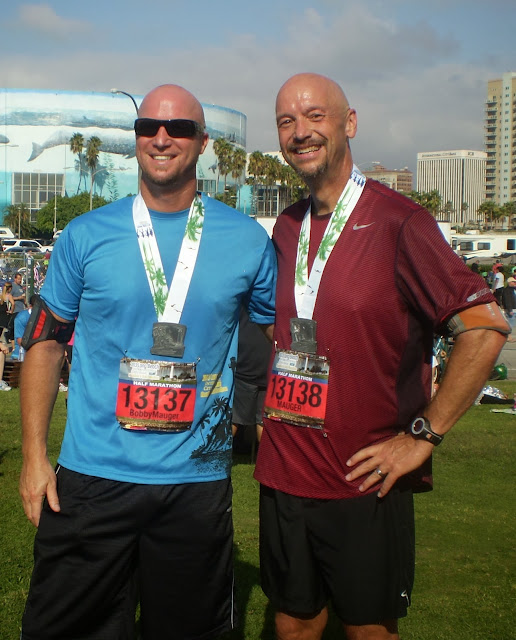 Right at the start I made my usual mistake, taking off at a faster pace than I ever run outside of race day.  I know better, yet I always talk myself into busting it early and trying to survive late.  One of these days I'll run a smarter race, but today was not going to be that day.  I ran the first mile in 7:32.  Along the way, I passed two ladies who were walking.  Now, I'm certainly not judging anyone, we all go at our own pace, but if you're not even planning to run the first mile, what estimated time did you put on the registration form that got you starting in Wave 1 or Wave 2?  Seems discourteous to me, but what do I know?  Just before the first mile marker, I saw Theresa and Amy off to the right.  I swung by for a quick high-five and continued on.  The weather was perfect.  Low 60's, slightly overcast, so the first five or six miles were fast and comfortable.  I hit the 10K split at around 52 minutes and there were Theresa and Amy again.  It was really great to see them at a couple different points along the course.  Miles eight through ten were right along the beach, absolutely beautiful, but this is where I started to feel it a little bit.  I don't know if it was because I'd started too fast, or maybe a residual effect from running the 5K the day before, but I suddenly felt a little sluggish.  I'd gone out faster than Bobby so I'd been ahead of him to this point, but right around mile eight is where he caught up to me.  We ran a mile or so together, but at the next water station he moved out ahead and I didn't see him again until after I finished.  He ran a great race, certainly a smarter one than I did.

At mile ten the course doubled back, going down Ocean Blvd.  Lots of spectators offered encouragement, but I was getting passed like crazy.  My pace for miles eleven and twelve was over ten minutes per.  Checking my Garmin, I saw that I was going to have to step it up to even break the two hour mark.  Thankfully the last half mile or so was a slight downhill, so I turned it on the best I could and crossed the finish line with a time of 1:59:53.  Couldn't have cut it much closer than that.

Bobby waited in the finishers' area for me, so after getting our medals (they're awesome . . . my favorite so far) and snacks, we posed for a few pictures.  It's a lot of fun running these things with my little brother.  Or in this case, behind him.

So all in all it was a little bit of a disappointment in that I was really confident that I could PR and maybe even break 1:55 and it didn't work out that way.  With several more races coming up, I'll have a chance to redeem myself and run more intelligently, especially during those first few miles.  Rock and Roll Los Angeles is coming up on October 27th, so I'll give it another shot then.

What a fun weekend, though.