Rock 'n' Roll Vegas was my second of back-to-back Rock 'n' Roll events, coming just three weeks after the half marathon in Los Angeles.  I was looking forward to the Vegas race for several reasons.  First, it was on the legendary Las Vegas Strip which promised to be an exciting place to run.  Second, it was a night race, so there was sure to be glitz and glitter.  And most of all, we had about twelve people from our school and families participating, so it was going to be a fun weekend all around.

The big challenge for me with Rock 'n' Roll Vegas was planning my nutrition around a night race.  Since most races start early on a Sunday morning, I'm used to doing my main carb-loading on Friday night and then having smaller, high-carb meals on Saturday.  This time, with the race scheduled for 4:30 on Sunday afternoon, I did most of my heavy eating on Saturday morning (hello, IHOP), and then again for a late lunch at Buca di Beppo that afternoon.  It worked out fine, as I had no issues during the run.

We checked in to the Excalibur and Saturday around noon, and my sister Katy and her husband Barry picked me and Theresa up to go to the race expo.  Katy and Barry live in Vegas, and this was to be Barry's first half marathon.  Katy was "along for the ride" this time, but we're going to talk her in to signing up for one of these things before too long.  The expo was nothing out of the ordinary, but very well-organized with lots of opportunities to spend money.  Barry, having completely caught the running bug, signed up for Rock 'n' Roll Arizona in January, so he and I will be running that one together.

Saturday night, we met up with the rest of our school folks for dinner at Margaritaville.  One of the main advantages of a night race is that you don't have to worry about getting to bed at a reasonable hour the night before.  Most of our group also ran Rock 'n' Roll L.A., but we did have two first-time half marathoners besides Barry, third grade teachers Lora and Amorette.  We had a great time hanging out with everyone, and headed back to the hotel.

With such a large group, we had to come up with a plan to meet up after the race, so we chose a spot about 200 yards from the finish line which turned out to be right in front of Treasure Island hotel and casino.  Several non-running family members were with us on the trip, so they would stake out an area for the rest of us to meet at once we finished.  What could possibly go wrong?

On to the race itself.

Our group met in the start village for a few team pictures, we listened to a bit of the pre-race concert featuring the All-American Rejects, and then headed off to our starting corrals.  This was a huge event with over 20,000 runners entered, so our group was spread out among the thirty-six corrals.  I was in Corral 8, Theresa was in 18.

For the first three miles, the course was so crowded that I couldn't settle into a comfortable rhythm.  To make matters worse, a "runner" who decided to start in an early corral even though she had no intention of running at the pace required to be in that corral accidentally knocked my water bottle off of my fuel belt.  This wasn't a huge problem but now instead of hydrating on the run, I'd be forced to deal with the water stations on the course which were undoubtedly going to be jammed up.  On the plus side, running on The Strip was awesome.  Lots of spectators, on-course bands, and just the overall excitement and sparkle of the Flamingo, Caesar's Palace, the Mirage, and all the other landmark casinos made this the most energy-packed race I've been in to date.

By about mile five, the field had spread out somewhat so it wasn't as difficult to work my way around other runners.  One notable exception was somewhere around mile six where I saw two women running side by side in front of me.  They were running along the right curb, as was I, and there was a cluster of other runners to their left.  My only option (other than to simply slow down) was to gently nudge my way between them.  Well, the nudge turned out to not be as gentle as I intended (no one fell, but there was contact) and to make matters worse, just as I'd forced my way up the middle, I saw one of the official Marathonfoto photographers capturing the moment for posterity.  Check out the 18th-20th pictures at the following link:

At mile eight, the course turned off The Strip and into a very dark and sort of scary neighborhood, 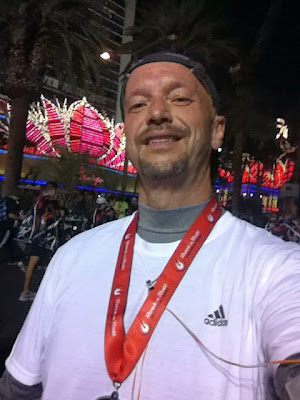 and looped back around to The Strip again for the final three miles.  Given this was my first night race and the final three miles were a gradual uphill stretch, I hadn't figured that I'd have a shot at a PR, but I did want to come in under two hours.  As I turned back onto The Strip, I checked my Garmin and saw that I would be able to do that with room to spare.  As I approached the finish line, I saw our group of spectators right where we'd planned for them to be, one of whom was holding up a "Go Coyotes!" sign (we're the Cottonwood Coyotes).  I crossed the line with a time of 1:58:57.  I'm perfectly happy with that.

I got my medal, had my official photo taken, picked up a chocolate milk and a bag of pretzels, and started walking through the finishing chute to the gear check to get my bag.  Most races, this is a fairly quick process but here in Vegas it took forever.  Much, much longer than usual, so it took almost half an hour for me to get my stuff and then work my way back to where our team had planned to meet.  I finally made it, and watched the rest of our runners complete the course.  Since it was such a long trek back to our meeting place, as the last few of us finished, the rest of us headed back to meet them.  We ended up splitting up (it just got too crazy out there) and said we'd see each other at work on Tuesday.  That's right, we all took Monday off.

All three of our first-timers completed the race and did a fantastic job.  I'm particularly proud of my brother-in-law Barry, who has been training hard for this for several months.  He's just going to get faster and faster, and I'm looking forward to running many more events with him.  And of course, we're always trying to recruit more runners at work, so hopefully our group will continue to grow.

Moving forward, I've got a 5K coming up in December, but the main focus between now and New Year's is building my weekly mileage and increasing my long runs in preparation for the Surf City Marathon in February.  Before that, I have two half marathons in January.