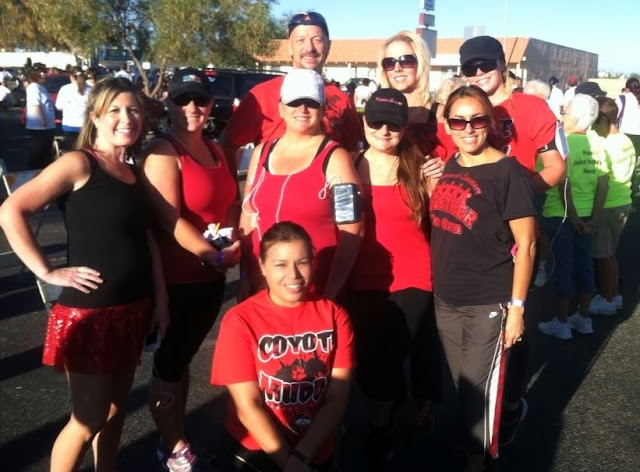 And the fall running season has officially begun.

The Hesperia Days 5K is a small (some would say "tiny") local event that is part of a community celebration that includes a parade, fireworks, and other events.  I don't know if we have a Pie Eating Contest, but even if we did there's no way I'd enter it.  Too many carbs, and after reading Stephen King's "The Body" featuring a set piece revolving around a kid named Lardass Hogan and his revenge upon those who wronged him, I don't think I could hold down a blueberry pie anyway.  Several members of our school's unofficial running team entered the 5K.  Now, when I say "small local event," what I mean is there is no official timing chip and (this is the truly disappointing part) no finisher's medal.  They do give medals for the top three finishers in each age group, but that's not the same thing, especially for those of us who are either too slow or too young to have a shot at winning one.  But medal or no medal, it's still a fun event and an opportunity to run with the folks in our hometown.

Besides, I did have a PR to think about.

The 5K is the only distance I don't have an "official" personal record for.  I've run 10Ks, half marathons, and a marathon, so those PRs are covered.  My best 5K that I've run in training is 24:47, so that's what I was shooting for.  I was also trying out a new piece of equipment which I borrowed from Theresa.  Specifically, an elastic "belt" that's sort of like a pouch.  There as cuts in it for you to slip in your phone, credit card, money, keys, pretty much whatever you'd need to have with you while you run (or didn't have anywhere else to leave it).  In my case, I slipped in my phone and car keys.

The course was about as simple as it gets, just down Main Street and back, basically.  Slight downhill for the first half, slight uphill for the second half.  I started at a fast pace (for me), about 7:10 per mile.  Music blaring through the earbuds, nice cool weather, perfect conditions.  After about half a mile, I felt around my waist and noticed my keys were gone.  The belt had failed, and failed miserably.  Okay, it's more likely that I didn't tuck my keys back far enough from the opening, but still.  So I just half a mile into the race, I abandoned my pursuit of a PR  and turned around to go look for my keys.

Yeah, SURE I did.

Actually, I pressed forward, assuming that someone would find my keys and turn them in to a race volunteer, and I would just go claim them at the check-in table after the race.  I guess there was also the possibility that someone would find my keys, wander around the parking lot clicking the unlock button and drive away with my car (and my wallet that was left in the glove compartment . . . and speaking of that, do you know anyone who actually keeps gloves in their glove compartment?  It should be called the "random crap compartment," if you ask me).  But impending car theft did not occur to me as I raced downhill toward the halfway point.

I hit the two mile mark in 15:14.  The rest of the course was uphill, so I wasn't expecting to match my initial pace, but I knew I had a great chance to beat my personal record.  I kept an eye out for my keys as I headed the opposite way on Main, but to no avail.

Coming to the finish line, I saw that I was going to hit a PR (though not by much).  My time (according to my Garmin, because as I said, there was no chip timing for this race) was 24:34.  I drank some water, and then went back and walked the first part of the course looking for my keys.  No luck.  I asked at the check in table, and I was told that a police officer had found some keys and left his business card in case someone reported a set missing.  Long story short, the officer had my keys and met me at the corner of Main and E.  Disaster (okay, inconvenience) averted.

And now the training continues.  Three weeks from now is my first "two event" weekend.  Theresa and I will be running the Spooktacular 5K in San Dimas, Ca. on Saturday, October 12 and then we head to Long Beach where my brother Bobby and I will run the Long Beach Half Marathon.

I'm not wearing the belt, that's for sure.