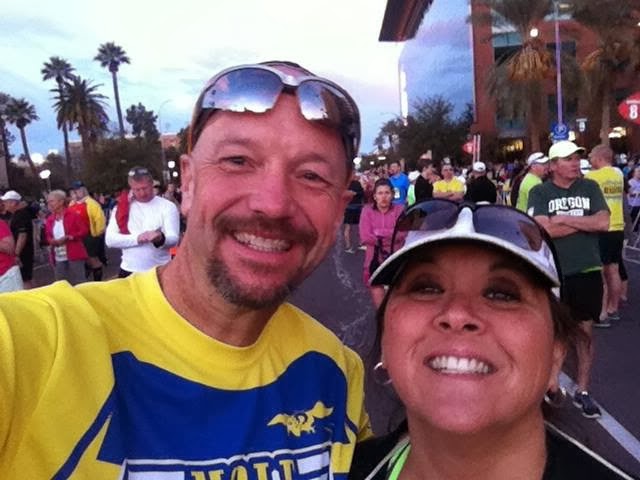 It's not as though I have a ton of half marathon experience, but last week's Rock 'n' Roll Arizona is definitely the best event I've participated in thus far in my racing "career."  It had everything a runner could ask for: top-notch expo, easy access to the start and finish line, a beautiful course, lots of spectator support, and a really cool medal.  Add to that the fact that my mom and dad joined Theresa and me for a weekend in the Phoenix area and, well, it just doesn't get much better than that.

Phoenix is about a five-hour drive from home, so we left early on Saturday morning and got to the expo at around noon.  We didn't spend a whole lot of time browsing this time . . . just long enough to get our bibs, shirts, a couple Rock 'n' Roll Marathon knicknacks, and for me a pair of Hoka Stinson Tarmacs that I plan to break in and use for next week's Surf City Marathon.  I've been having some foot issues lately and . . . you know, I think I'll save that for a post of its own (along with a Hoka review).  We checked in to the hotel, grabbed lunch at Joe's Crab Shack (carbo-loaded on the lobster pasta -- delicious), and pretty much relaxed for the rest of the day.  Theresa and I took some time to drive the half marathon course, which is something I like to do whenever time allows.  Always good to know what you're up against.  There were a few long straight-aways through Tempe (starting at ASU), and only one significant uphill stretch -- a quick out-and-back about half a mile in distance.  That is, half a mile up, and half a mile back down.  This was at mile nine, and from that point on it would be a mostly-downhill stretch to the finish We woke up at around 5 AM to get ready for the 7:50 start time.  I had my usual CLIF bar and Powerade Zero for my prerace "meal" and then mom and dad dropped me and Theresa off near the starting line.  I was running the half, of course, and Theresa was running the 5.4 mile "Mini
Marathon."  I've recently discovered that I've become fairly good at anticipating how well (or poorly) I'll do at any given race based on the course profile, my level of training, and other factors.  For instance at my last race, the New Year's Race LA, I was pretty sure that sub-2:00 was unrealistic due to the hilly course and I ended up clocking in at 2:04:41.  For Arizona, I knew it was an easier course and I was feeling really good in training the previous week, so I had a time of 1:57 in my mind as what I could reasonably expect, and I would be more than satisfied with that result.

All in all, the race seemed to go by really quickly, perhaps due to the long stretches on the course along with the bands every few miles and the hundreds of spectators cheering and holding signs of encouragement (my favorite: You Paid $100 for this . . . Only $75 to Go!).  I had no issues along the way.  The runners were pretty well spread out so there wasn't a lot of jockeying for position.  I chose not to use my Amphipod belt, opting instead to carry a couple gels in my pocket and rely on course support for water.  Checking my splits, I hit the 5K mark in just over 26 minutes and the 10K in 53:51.  At about the seven-mile mark the course moved out of the "busy" part of town and turned into a nature reserve and park, which was beautiful.  This is where the hill came into play, right about mile nine.  It wasn't too steep (in fact, it seemed worse when we'd driven in the night before), so I forged ahead to the turn-around where runners were treated to a gorgeous view of the greater Phoenix area.  No time to sight-see, though, as I headed back downhill increasing my pace to make up some time.  I knew that in order to come in under two hours (which is always my primary goal for a half marathon) I'd need to hit the ten-mile mark in about 1:30.  When I got there, I took a peek at my Garmin.  1:28:12, and nothing by 3.1 miles of downhill in front of me.

I cruised past the Oakland A's spring training complex, crossed a short bridge, and headed toward the final turn to the finish line.  I couldn't find my parents or Theresa in the crowd, but I knew they'd be there somewhere.  I turned on the final kick and crossed the line with at time of 1:56:41.  Not a PR, but pretty close.  In fact, it's my second-fastest half marathon to date.  I went through the finishing chute and got my medal, a chocolate milk, some pretzels, and then I found Theresa waiting at the finish line festival, sporting her Rock 'n' Roll Mini Marathon bling.  We had one more order of business -- finding the Heavy Medals booth so we could pick up our Desert Double Down medals for completing both the Rock 'n' Roll Las Vegas and Arizona events.  Once that was taken care of, we met up with my parents, went back to the hotel to shower and change, and then of course we went to lunch for our traditional post-race burger and fries.  Red Robin, if you're interested in the details.

As I said earlier, Rock 'n' Roll Arizona is a fantastic race, one that I highly recommend to everyone.  I'm certainly considering doing it again next year, although it's the same day as the Carlsbad Marathon and Half Marathon, which I've heard is awesome as well.  We'll see what the future brings as far as that goes.

In the meantime, I'm getting ready for next week's Surf City Marathon, which will be my second full marathon.  Looking forward to seeing how the new Hokas handle the 26.2 miles of torture.

Until next time, Happy Running!